It's likely that most people reading this will know a lot about either Arduino or X10. (If you know about both - you're in good shape. If you don't know about either - I'm surprised you're here!) In any case, I won't go into detail about either. You can learn about Arduino here, and Google will give you lots of info on X10.

In short, the Arduino is an inexpensive (~$30) microcomputer that you program in C/C++ that has input and output pins that connect to real world devices. I choose the Arduino because of it's popularity, price and wonderful support.  It's likely another type of microcomputer can be used for these projects, but I'm only comfortable discussing the Arduino and the C language.

X10 is a home automation system that typically sends signals down your power line to remotely control lights and appliances. There are many types of modules one can get to do various things. While X10 is old technology, it still has some key advantages regarding remote control. Primarily, it is the cheapest and safest way I know of to control things that plug into the power line.

So what are the advantages when you combine the Arduino and X10? Here is a diagram where I tried to show X10 and Arduino working together. 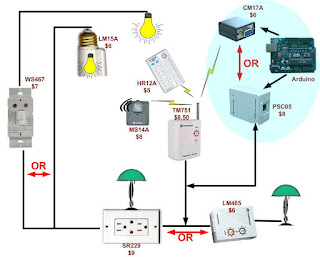 From an X10 user's perspective, the X10 world now becomes your oyster. You are no longer bound by a PC and the limited functionality and cost of commercial software. You can create entirely new functionality while replacing your ActiveHome SW and your CM11A / CM15A interface device.

From an Arduino user's perspective, you gain an option for wireless remote control at a much lower cost per controlled device than say XBee and roll your own triacs. It's also a hell of a lot safer than mucking around with line voltage. The modules are UL approved and cost as little as $6 on Ebay  (link just an example).

Obviously, all of the above is just my opinion and points can be argued. You can fault X10 for not being reliable. Personally I solved most of my issues with a XPCR coupler /filter / amplifier. For those in 220V land, X10 charges an arm and a leg extra for the 200V models. See this website for a cheap way to convert most 115V modules.