Please note: This project is probably 90% completed. The remainder was giving me hell, but I'm back at it. Currently it should only be considered for reference but I be updating it soon.

First off I want to acknowledge and thank "soldernerd" for the inspiration and education. His blog posts on his MPPT charger are nothing short of fantastic. They are one of the most thorough writeups I've seen for any project, and his hardware and software design are totally professional. If you are interested in any solar MPPT project you should go through his blog - which is here. In fact some of the below will assume that you are familiar with it.

So I have borrowed from his project heavily, but I have also adapted it to my own needs and skills. Here are the main differences . . .
There are other changes of course. Note that even with the big head start I got from soldernerd, I have a couple of months work into this project so far. This is not a project you can knock off in a short time. It's also very unforgiving! I was stuck burning out chips for quite awhile. It turned out I used a 'byte' instead of an 'int'!

OK, if you've read this far you are probably ready for some pictures!

First, here is the "ESP Swiss Army Knife" that I have already used in my watering project shown on top of the MPPT board ... 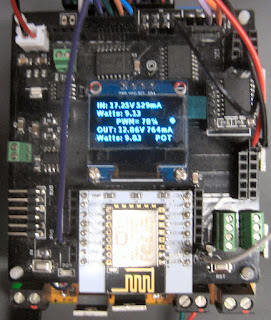 As mentioned this board supplies the ESP8266, OLED, RTC, and the GPIO and DAC / ADC. There are a few parts on this board that are not used for this project - namely the moisture sensor, MOSFET, and SD card.
You can also see a bit of the MPPT board at the bottom.

You can find the schematic and board layout for this board in this post.


Here is a photo of the Rev. B MPPT board. 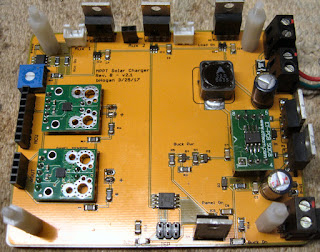 Since I was burning out MOSFET drivers during development I have it mounted on a green carrier board temporarily. There are also 2 variations of the MIC4605 driver - one only for a synchronous buck, and one that can support asynchronous as well. I will likely only be able to use a synchronous buck due to not having the knowledge to do mirrored PWM on the ATtiny85.

The ATtiny85 is in the lower center. It simply reads the requested duty from the DAC output as analog in, and supplies the MOSFET driver the PWM at 122.5kHz. Note that the DAC supplies its analog signal even when the ESP is sleeping so the buck converter will still run.

Here is is screenshot of the data set by the MPPT Charger to the Sparkfun IOT site ... 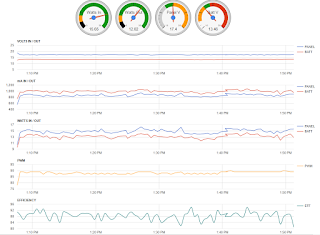 OK, you may be wanting to see schematics, board files, and source code. A word of warning. At this point I do not suggest trying to build off what I have here, and indeed, I am not ready to cooperate. When I'm further along this project will be open source, but lets wait for the goal post to quit moving. I may even have some PCBs available. Another warning is that a project like this will likely cost more than you can buy a pretty good MPPT charger for.

Having said that, here is the schematic and board view for Rev. B of the MPPT PCB. 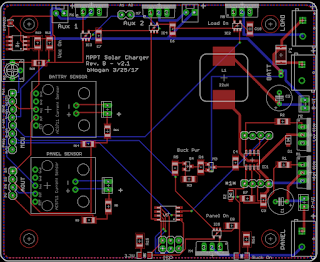 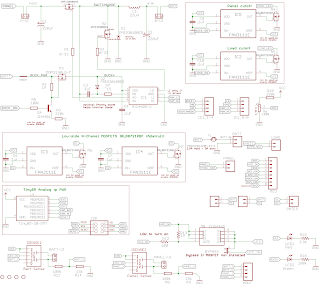 I have not mentioned the software yet. That will be a separate post and this is just an intro.

If you have general questions at this point, it may be best to wait until I am further along. Specific questions, and observations are welcome at any point however.