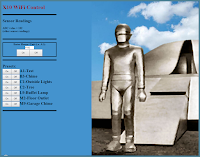 I posted an earlier version of this, but it was based on the Atmega328 and an Ethernet module.

This version is based on the ESP8266 which provides the microprocessor and connection to the network via WiFi.

I've been having a ball with the ESP8266. It's cheap, programs with the Arduino IDE, and it just works. I've already created a product with it that connects my Geiger Kits to the internet.

So what is it?
The ESP8266 puts up a webpage (like the above) on your local network. The page has buttons for the X10 devices that you want to control. When a button is pressed the ESP8266 drives a CM17A and turns your device on or off. The page also displays any sensor readings that are connected to the ESP8266. So if you are into X10 home automation, this is a cool gadget.

Hardware-wise it's an ESP12 variant of the ESP8266. It's connected to the CM17A through a level shifter. The level shifter is needed because the ESP8266 is a 3.3V device and the CM17A requires 5V to operate. (Since the CM17A is powered by the difference between RTS and DTR strong pullup resistors must be used on the high side - 330Ω.) 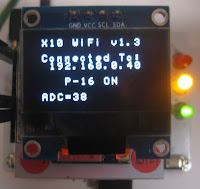 You can also attach an I2C OLED display to the ESP8266 which will show the X10 commands that were received. 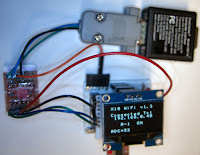 Here is the complete setup. I used the ESP8266 development board I created for the GK-WiFi kit (available here).


The software is finished (as far as I'm concerned) and is available here.
Posted by BroHogan at 1:18 PM