[Edit 4/10/11] This project is now available in kit form - with PCB and parts. Please click here for more information.


I guess I'm a "metroholic".
I've always been fascinated with measurement tools, so building a Geiger counter seemed like a logical thing to do. I will describe the build process here - even though the Arduino only plays small part, and that only a truly sick person (which I guess I am) would consider a Geiger counter as part of a Home Automation project.

"All work is derivative" and I owe the basic HV circuit to Jim Remington's Pololu article (where he mentions he derived the circuit from Tom Napier). To this, I contributed a nice "click" circuit, but more importantly, the sources, tips, and background that is helpful when building your own.

If you don't have a Geiger tube laying around in your junk drawer, you will have to order one. But the important thing is that you can build and test your circuit while you are waiting for that package from Russia.

The Geiger tube I settled on was the SBM-20. I ordered mine on eBay. You can also get it at the Electronic Goldmine (and even a whole kit). Later, I found this source for all tubes Russian, (and the best specs and prices on Geiger tubes). I am very happy with the SSBM-20. I originally tried a smaller glass tube - the CI-3BG - but found it much less sensitive - especially to beta particles.

There are 2 types of tubes. Those that have a mica window are the most sensitive. They will detect alpha and beta particles as well a gamma rays. Because of the mica, they are more fragile and generally are more expensive. The other type, like the SSBM-20 which I used, have only the metal jacket. They will detect gamma rays (the most penetrating) and some beta particles (more easily stopped). Considering the SSBM-20 is all metal, it does a good job with beta - as long as you put the sample right on the tube. Uranium is a big beta emitter, so some sensitivity to beta is a good thing.

As far as the circuit goes, you'll find several types on the internet. (One I also liked is here.) The first circuit I tried used a 1:1 transformer, but I preferred to go with a simple inductor instead. I also liked Jim's circuit because it works with a range supply voltages and uses very little current from the battery. Originally, I wanted the Arduino to be the oscillator instead of the 555, however, later I decided that I preferred the Geiger to run independently, and use the Arduino only for counting and display purposes. For the audio output, I had a good time designing my own based on what I learned on-line.

On the left is pretty much Jim's circuit without the extra HV shutdown transistor. The 555 is used in an unusual way - it varies the duty cycle based on the input voltage. I tested 4-9V on input. The oscillator (~4KHz) is used with the inductor as a charge pump.

Q2 and D2 are the only critical type components. Q2 must be a high voltage transistor - the MPSA42 is a common type and works nicely. D2 is a "high efficency" or "ultra fast" diode. A regular diode will not work. On the schematic, I have listed some substitutions I've tried that worked. You might find a diode of this type in a PC switching power supply. R7 adjusts the high voltage, and seems to be pretty touchy about it's value - too low or too high and no HV. I bought most of the parts at Electronic Goldmine including the inductor.
[Edit 4/2/11] Also note that I used the CMOS version of the 555 timer - TLC555CP. If you use the bipolor version (uses more current) LM555 or NE555 you will need to adjust some values.

I labeled a HV Test Point. You want about 500VDC through the tube. But here's the rub, it's only a few micro amps, so most DMM's will load the circuit too much to measure it. If you measure around 200VDC you're doing fine. Don't even bother trying to measure across the tube - the 5.7M will drop everything.

Another tip is that the Geiger tube won't work if you leave your DMM connected to the HV test point. In short, you need a very good DMM or faith.

Finally, I wouldn't advise soldering leads directly to the ends of the tube. You run the risk of loosing the vacuum or otherwise damaging the tube. Use some sort of clip, or wrap several turns of wire around the ends.

While waiting for my tube, I tested by touching the wires that would go to it. (Two fingers on the same hand.) It's 500V but just a tiny amount of current. I could not even feel the voltage, but heard the click and got the interrupt. For obvious reasons, I can not recommend this procedure, and I'm just describing what I did.


You will probably need to tweak the click circuit based on what type of "click" you like, and the resonant frequency of your particular piezo. R14/C7 controls the length of the click and R15/C6 controls the frequency of the click. The phase inverter (IC2B and IC2C) is used to get the most deflection out of the piezo and hence the loudest sound. For the inverters, be sure to use a logic family that provides enough current at the outputs. I had bad luck with the "LS" family and used the "ACT" family (i.e. SN74ACT14N) but the "HC" family should  also work (i.e. 74HC14N).

Once the circuit is built it's fun to play around with. With mine, I get around 35 CPM (Counts / Minute) background - a basement in Colorado, probably with Radon gas. Of course you will likely tear open a smoke detector and get the Am241 pellet out of it (600 CPM) and buy some Uraninite on eBay (350 CPM). [Edit 11/2010: Just tested some lantern mantles (Thorium-238) I got from this guy - got up to 6000 CPM.] The entire circuit consumes less than 3mA @ 5V in normal background.

The interrupt (before D3) goes low for about 150uS for each event. I made a simple Arduino sketch to count the events and calculate CPM. You can download it here. Later, I'll involve the Arduino more - building it into the case, and running a little 8x2 LCD display. Note that the Geiger counter module is totally standalone, so you can stop with that if you want.

For Home Automation, I picture it sitting on my roof with a CM17A periodically transmitting the current background radiation to the Nex10 box in my house (similar to the Wireless Temperature Transmitter). Then, if the radiation exceeds a threshold, I can dim the lights in the living room!

See Part II post above with added MCU board, display, and finished enclosure. But here is an intermediate step with just the Geiger circuit in a case . . . 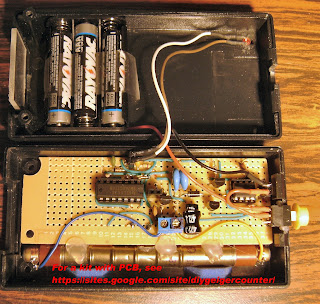 A quick movie in it's intermediate state . . .